8 cities under the sea, a string of civilizations rising and falling

An ancient city beneath the waters of Qiandao Lake in China's Zhejiang Province, known as the Lion City, dates back to the Han Dynasty and was submerged in 1959 when the Xin'an River Dam reservoir was filled with water to power a hydroelectric power station, only to be rediscovered as a dive site some 40 years later. The Lion City is remarkably well preserved, with a network of over 250 intricately carved pagodas and stone sculptures, sparking interest in the thousand-year-old city underwater. Many parts of the world are home to such submerged cities. Some have even languished underwater for millennia, quietly preserving the ruins of ancient civilizations. Explore the underground city with LEFEET! 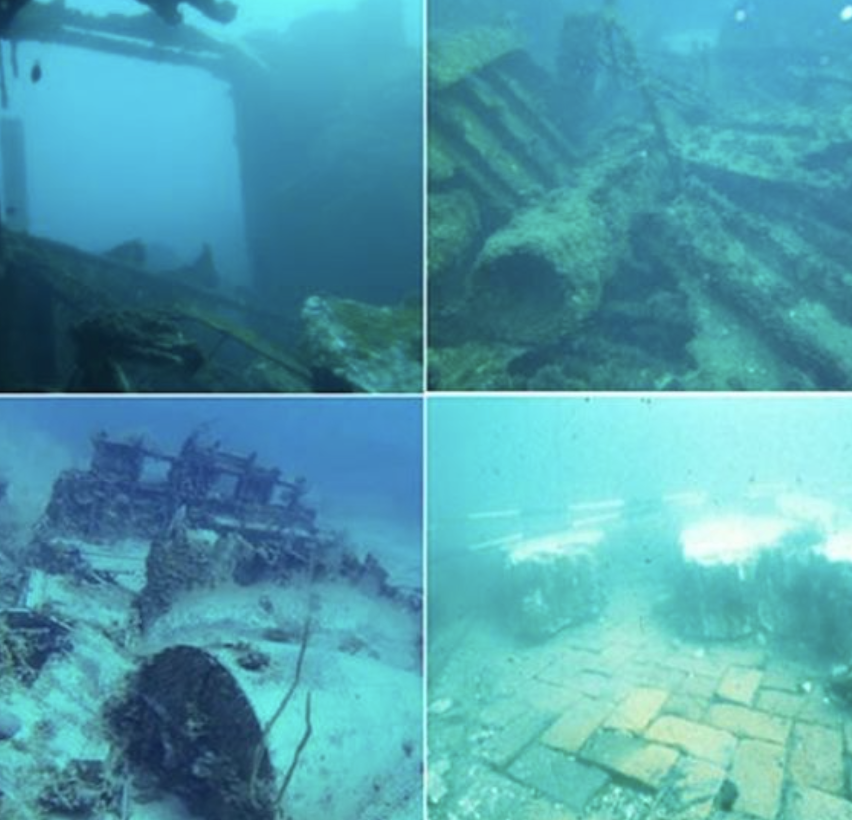 Port Royal, just south of Kingston in the eastern half of Jamaica, was once known as the 'wickedest city on earth, but now it can only be visited by diving as it is now an underwater city, considered one of the world's most fascinating dive sites and one of the best preserved underwater ruins in the Western Hemisphere. In the 17th century, Port Royal was the shipping center of the Caribbean at the time. It became the most significant and most affluent den of vice in the Caribbean, with its bars and brothels frequented by pirates. However, on 7 June 1692, Port Royal was hit by a devastating earthquake that sank two-thirds of the city's area into the Caribbean Sea. As well as the city remains, divers enjoy exploring the area's many shipwrecks and tropical coral reefs. 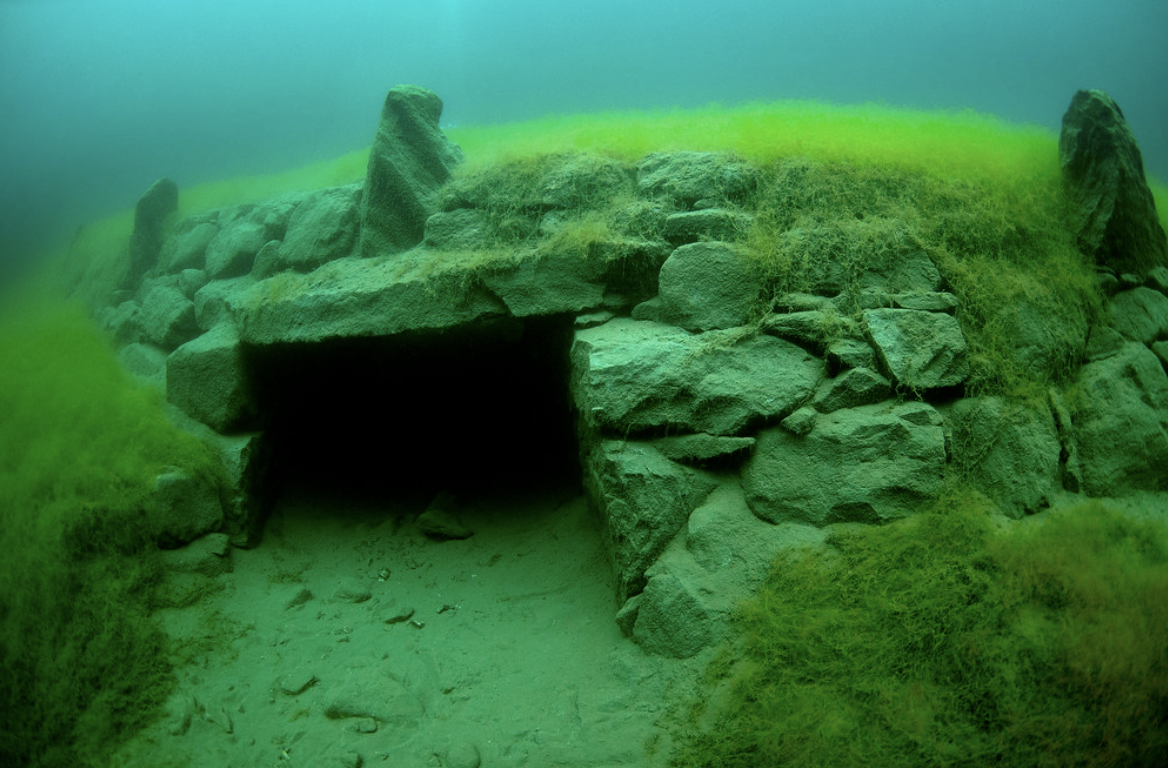 Before 1908 there was a small village in the Norangsdalen valley in Norway. A rock slide closed the valley, blocking the water flow through it. The lake has been left intact, and the village is usually not visible underwater. However, on a clear day, you can drive down and see the remains of the village: the farmhouses, the fences, the gravel paths, and the green grass, all of which glow mysteriously in the blue waters of the lake. You can walk along the stone fence, pass through the narrow bridge holes and wander among the dead branches of trees that seem to have grown out of the sea floor. The underwater village is only about 5-15 meters above the surface. The difficulty factor for diving here is low, so no matter what level of diver you are, you will have the opportunity to dive and enjoy the wonders. 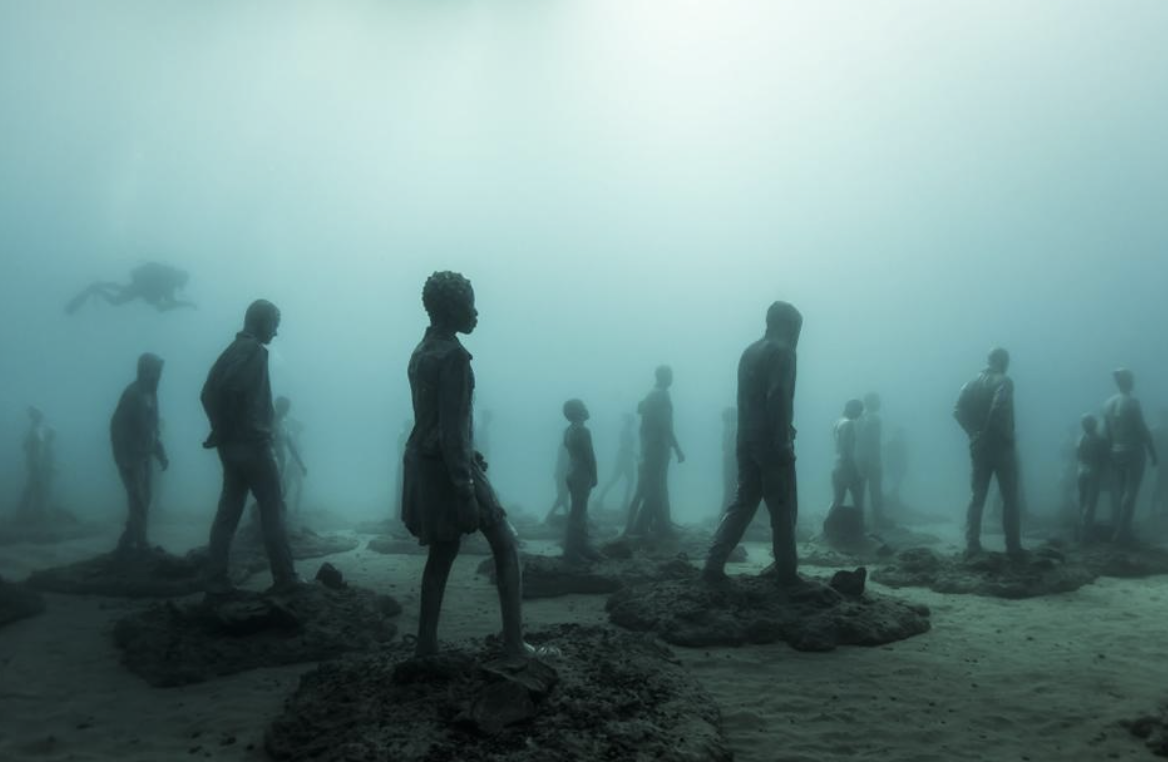 Pompeii may be Italy's most famous lost city, but the sea-swept city of Baia is just as old as it is. Baia was the Las Vegas of the Roman Empire two thousand years ago. Located on Italy's cratered west coast, about 30 kilometers from Naples, it was a resort town that catered to the fantasies of all kinds of people. The super-rich of ancient Rome came here to party at weekends, and politicians of great stature built sumptuous villas and fine marble statues on its beaches, where those who were there indulged in the wildest desires. Centuries of hydrothermal and seismic activity triggered the earth's crust's slow rise and fall. Much of Baia was submerged by the sea, transforming it from a bustling city on land into a mysterious site under the sea. The Baja Underwater Archaeological Park has eight dive sites, five only about 5-15 meters deep, with a tiny difficulty factor. Diving into the water reveals thermal baths, marble floors, replicas of sculptures, and much more. The "Villa a Protiro," with its mosaic tiles intact, is a must-see. 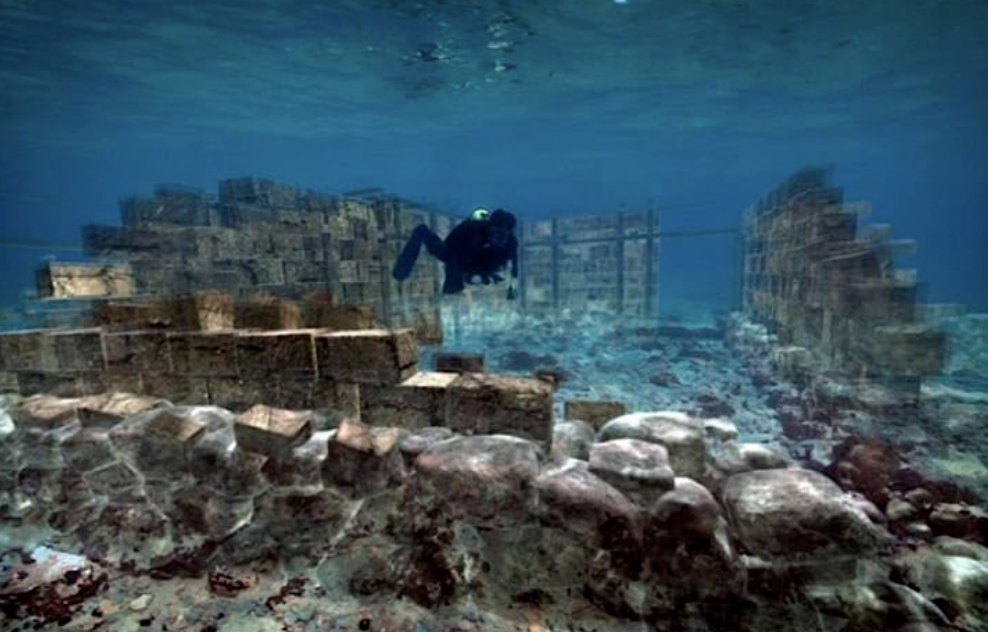 Located in the Peloponnese in southern Greece, Pavlopetri is the oldest sunken city in the Mediterranean and one of the oldest underwater cities in the world. It is around 5,000 years old, and its ruins date back to the early Bronze Age. Although the exact reason for its sinking to the bottom of the sea is unknown, researchers speculate that an earthquake flooded Pavlopetri around 1000 BC. It was not rediscovered until 1967 and was later listed as an underwater cultural heritage site by UNESCO. More than ten semi-intact structures can be seen three or four meters below the water's surface. Although it is closed to snorkelers who come for recreation, snorkellers can observe the sunken city from above. 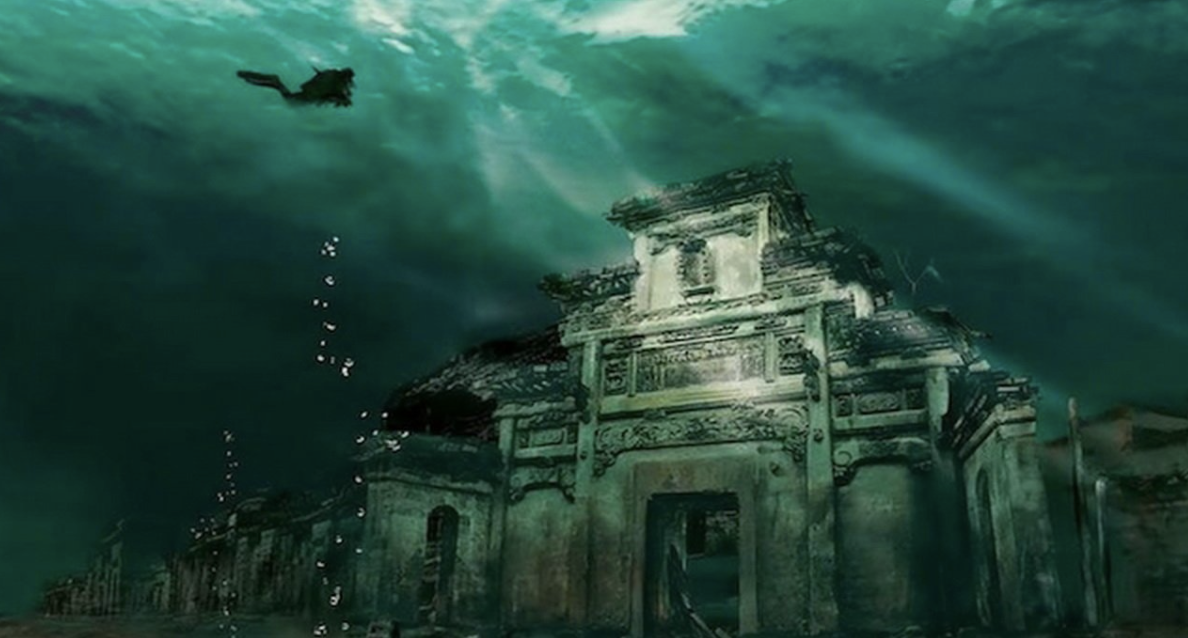 Legend has it that the lost city of Dwarka was founded by the Hindu god Krishna. When Krishna transcended the mortal realm and became a god, the ancient city was swallowed up by the sea. Today, Dwarka is an important Hindu pilgrimage site in the north-western Indian state of Gujarat. After decades of exploration and research, in 1963, archaeologists began excavating its submerged parts. In the years since, archaeologists have gradually uncovered ancient stone fortifications, ancient irrigation systems, and anchors, among other artifacts, suggesting the existence of a bustling port city. The remains of ancient Dwarka are now gradually becoming an official dive site to promote tourism in Gujarat. 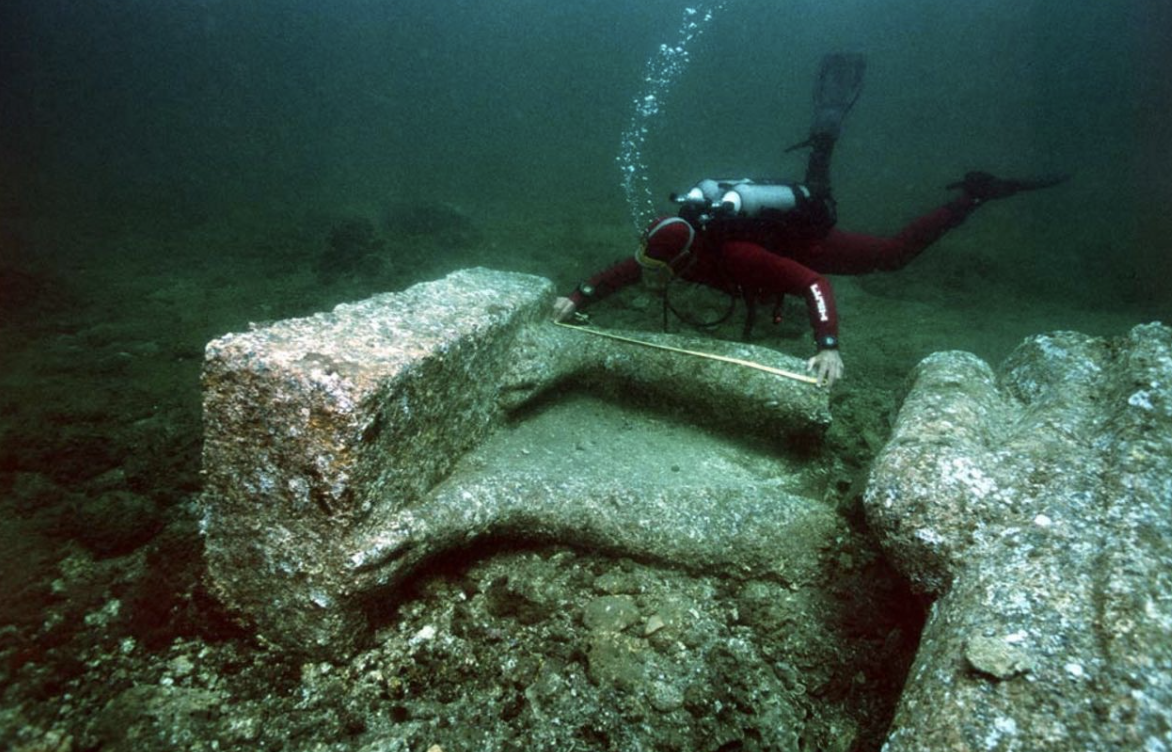 Tonys is a former Egyptian city, known as Tonys in the original Egyptian language and Heraklion in Greek, which lies about 10 meters underwater near the port of Alexandria. The city is said to have been built around the 8th century B.C. and was once an important port for foreign traders, mainly ships from Greece, before natural disasters caused its sinking around the 8th century A.D. During excavations in 2000, archaeologists found well-preserved temples, statues, inscriptions, jewelry, gold coins and shipwrecks, all evidence of a once thriving city built around a canal. Divers are still busy exploring the site and will likely continue for several years. According to Franck Goddio, who discovered the ruins, around 95% of the ancient city is still waiting to be excavated. 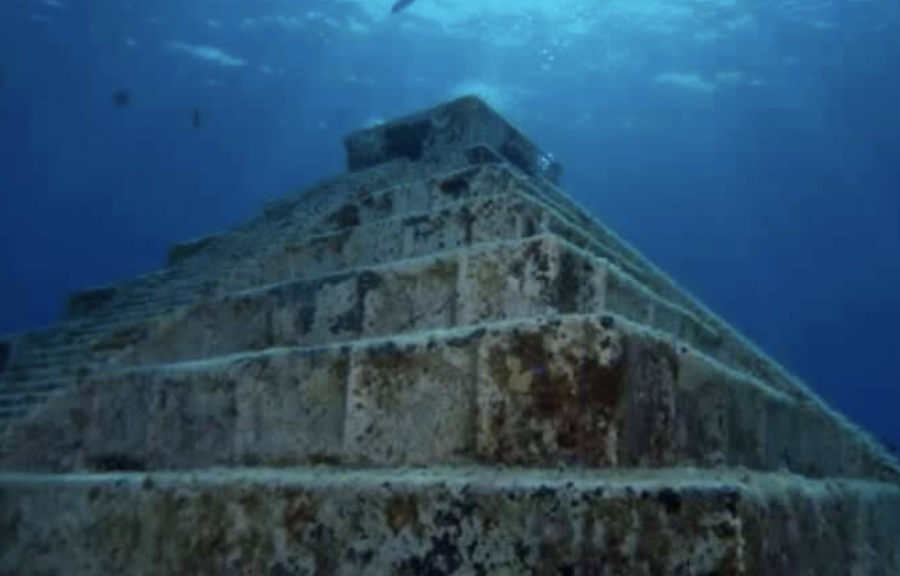 The Yonaguni Monument is an enormous pyramidal structure on the seabed not far from the Japanese island of Yonaguni, where a series of underwater strata of unknown history exist, discovered in the mid-1980s. Some belief it to have arisen naturally, while others believe the structures to be the remains of an ancient city that sank to the sea floor some 2000 years ago due to an earthquake. Today there are growing indications that this is more likely to have been a city, and the Yona Monument is the center of it. Although not officially recognized as an archaeological site, the Yona Monument has become a popular dive site in the Ryukyu Islands of Japan, especially during the winter months when hammerhead sharks are abundant. 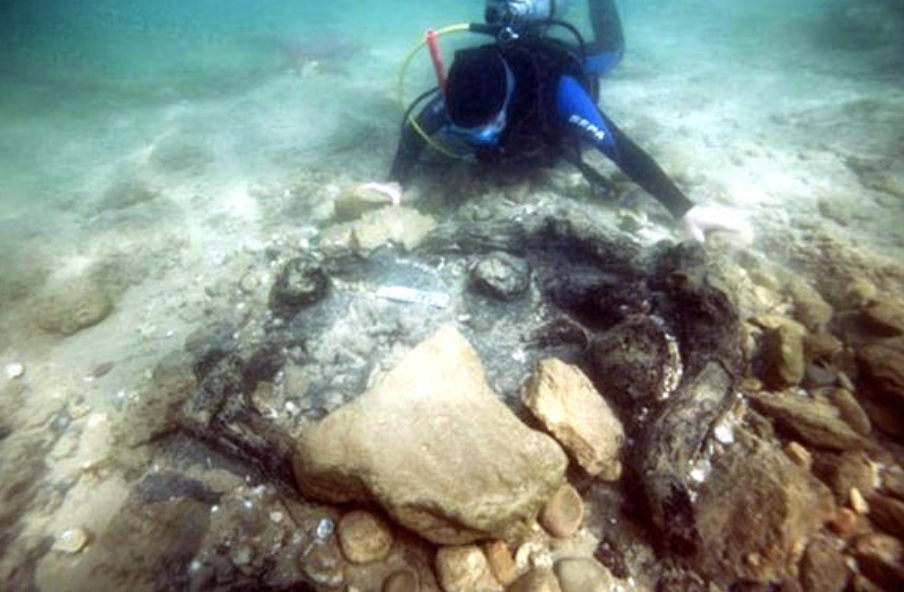 The ancient village of Yat Lit Yarm, located in the Mediterranean Sea, is a sea-flooded Neolithic village that was first discovered in 1984 by Israeli marine archaeologist Ehud Galilee. The reason for its sinking to the bottom of the sea is still hotly debated, with one relatively reliable theory suggesting that a tsunami suddenly caused its inhabitants to flee some eight or nine thousand years ago and that the waters flooded the village. According to this theory, the ancient village of Atlitjam is the oldest known underwater village. The remains in the water include houses, graves, and a well. The fascinating feature is the semi-circular megalithic formation of seven boulders in the center of the village, with a freshwater fountain in the middle and markings in the shape of a water cup on a nearby slab. Archaeologists believe that this area may have been used for water rituals. Recreational diving is no longer permitted in the ancient village of Atlitjam. However, archaeological divers are still allowed to explore the area.